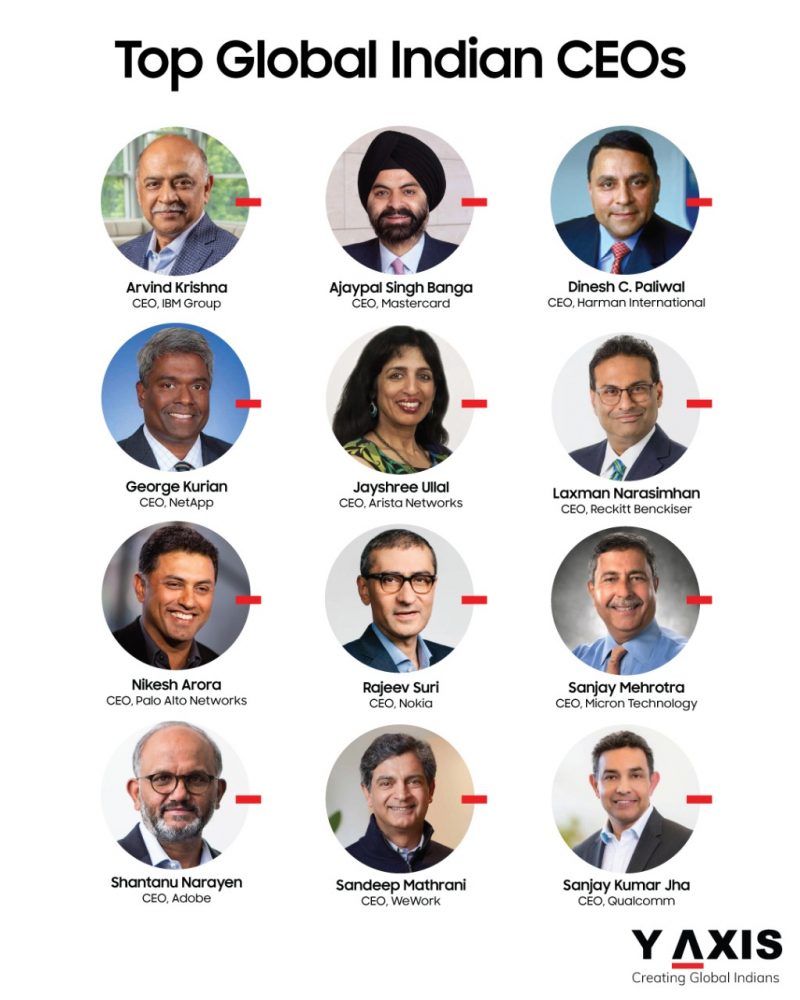 Over the past few decades, major global companies have Indian origin CEOS at the helm. This is no surprise considering the fact that they are masters at their craft and scale up in their careers giving them the cutting edge over global counterparts.

Here is a list of 15 CEOs heading top global companies.

Born in Hyderabad, Shantanu Narayen has been the CEO and Chairman of Adobe Inc. since 2007. He did his bachelor’s degree from Osmania University, Hyderabad, and later did his MBA from the University of California, Berkeley. Prior to joining Adobe, he was working with Apple.

He was named as  the world’s best CEO by Barron’s magazine, in the year 2016 and 2017. He is also the board member of Pfizer and vice-chairperson of the US-India Strategic Partnership Forum.

After joining the company in 1990, Ajaypal Singh Banga was announced as the new CEO of Mastercard in 2010. He did his degree in economics from Delhi University and later did his MBA from the Indian Institute of Management in Ahmedabad.

Jayshree Ullal is an American billionaire businesswoman who is the CEO of Arista Networks since 2008.

She graduated from San Francisco State University, and did her master’s degree in Engineering Management from Santa Clara University.

Forbes magazine named her as one of the top five most influential people in the networking industry in 2010.

Rajeev Suri has been the CEO of Nokia Inc. since 2014. He joined the company in 1995. Suri is a citizen of Singapore and studied at the Manipal Institute of Technology.

After working in diverse roles in companies such as Akamai Technologies and Oracle, George Kurian became the Chairman and CEO of NetApp in 2015.

Originally from Kerala, he is an alumnus of Princeton University, where he completed his MBA.

Nikesh Arora, has been the CEO of Palo Alto Networks since 2018. Originally from Uttar Pradesh and coming from an air-force background, Nikesh is an alumnus of the Indian Institute of Technology, BHU and Boston College, Northeastern University.

Dinesh Paliwal is the CEO of Harman International and a board member for Nestle. After completing his bachelor’s in engineering from the Indian Institute of Technology, Roorkee, Paliwal did his MBA in Finance from Miami University, Ohio. The prominent awards Paliwal has won include the Metro New York Entrepreneur of the Year by Ernst and Young in 2010 and the Businessman of the Year by Fortune Magazine in 2014.

Sanjay Mehrotra has more than 30 years of experience in the semi-conductor industry. He co-founded SanDisk in 1988 and was the President & CEO of the company till 2016. Mehrotra became the CEO of Micron Technology in 2017.

Mehrotra is an alumni of BITS Pilani and has a master’s degree in Electrical Engineering & Computer Sciences from UC Berkeley.

Laxman Narasimhan became the CEO of Reckitt Benckiser in 2019. An engineering graduate from Pune, he did his MA from The Lauder Institute at the University of Pennsylvania and an MBA from The Wharton School.

Arvind Krishna has been with IBM for over two decades and was appointed its CEO in 2020. An engineering graduate from IIT, Kanpur, he completed his PhD in electrical engineering from the University of Illinois at Urbana-Champaign.

Sanjay Kumar Jha is well-known in the semiconductor foundry business. He was the Chief Operating Officer of Qualcomm and later became the Chief Executive Officer of Motorola Mobility. He has a PhD in electronics engineering from the University of Strathclyde, Scotland and is originally from Bihar, India. He was also the CEO of Global Foundries, one of the world’s largest semiconductor foundries headquartered in Santa Clara, California, United States.

Indra Nooyi was one of the most powerful businesswomen in the world when she was the CEO of PepsiCo. Before this, she held senior positions at the Boston Consulting Group, Motorola, and Johnson and Johnson. Currently, Nooyi is on the board of Amazon, International Cricket Council (ICC), and Schlumberger.

Nooyi did her Bachelor’s degree in science from the University of Madras and later did a Post Graduate Program Diploma from Indian Institute of Management Calcutta. In 1978, Nooyi joined the Yale School of Management and moved to the USA where she did her master’s degree in Public and Private Management in 1980.

Vasant Narasimhan, an Indian –American physician, became the CEO of Novartis in 2018. Narasimhan received his bachelor’s degree in biological sciences from University of Chicago, his M.D. from Harvard Medical School and his master’s degree in public policy from the John F. Kennedy School of Government. He has previously been the Global Head of Biopharmaceuticals & Oncology Injectables at Sandoz International.

Ivan Menezes is the CEO of Diageo, a British multinational alcoholic beverages company, since 2013.  Menezes did his graduation from the University of Delhi, and later did his management course in Indian Institute of Management Ahmedabad, and the Northwestern University’s Kellogg School of Management. Menezes joined Diageo in 1997.