Coronavirus and Express Entry draws in first half of 2020 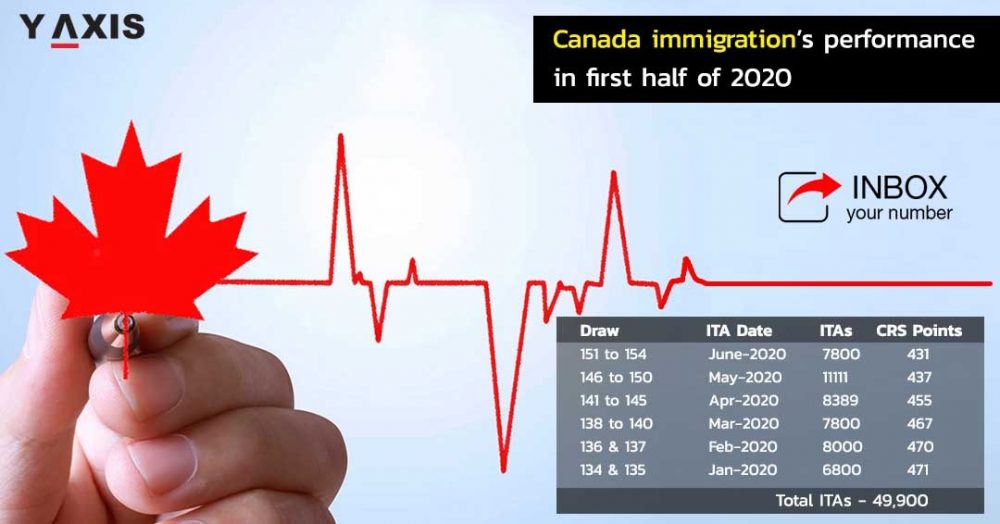 In fact, the Immigration, Refugees and Citizenship Canada (IRCC) held the biggest Express Entry draw on February 19, where it invited 4,900 candidates in a single draw.

Canada is determined that the Coronavirus pandemic should not put the brakes on its immigration plans though it had imposed travel restrictions in the wake of the pandemic. The country’s immigration minister Marco Mendicino reiterated this and said that immigration will be the key to the success and economic recovery of Canada post the Coronavirus crisis.

While the biggest Express Entry draw was held in February, the smallest draw was a PNP draw that issued 118 ITAs on April 15. This draw had the highest CRS cutoff of the year at 808.

However changes were induced by the pandemic, the Express Entry draws that consists of Foreign Skilled Worker Program (FSWP), Federal Skilled Trades Program (FSTP), and Canadian Experience Class (CEC), were no longer held every two weeks but are now seeing a trend of two draws being held within a few days or even within a few hours of each other.

As for the number of Express Entry draws held till date, 21 draws have been held including the draw on June 25 whereas only 12 draws were held in the first half of 2019.

The IRCC has conducted more Express Entry draws in the Provincial Nominee Program (PNP) and the Canadian Experience Class (CEC). These candidates were targeted because they are most likely to be in Canada at the time of the draw.

Most of the provinces held Express Entry linked PNP draws in the first half of this year.

There were more Express Entry draws targeted at CEC candidates in the first half of this year but they had significantly lesser CRS requirements.

FSWP and FSTP candidates were not invited unless they had a provincial nomination. However, Express Entry candidates who are at present outside of Canada and do not have Canadian work experience or a Canadian job offer have been issued ITAs through Express Entry-linked PNP draws.

The fate of Express Entry draws in the second half of the year will be determined by the decisions of the government once it lifts the travel restrictions on June 30. However, the immigration minister has reiterated that Canada is keen to continue its immigration programs to invite more immigrants into the country.

← What are the facts behind SAT exam cancellation for 2020? Canada is an alternative to the US for prospective immigrants →