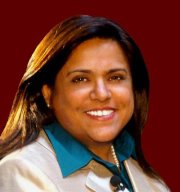 WASHINGTON: Eminent Indian-American lawyer Anu Peshawaria has been felicitated by the US state of California with the ” Award of Excellence” for upholding immigration rights, in particular those of women, and spreading social awareness.

Peshawaria, who is the younger sister of Kiran Bedi, was felicitated yesterday at an awards ceremony, where Anna M Caballero, California’s Secretary of State and Consumer Affairs, said the state was “honoured” to have her live and work in it.

“Our diverse state welcomes immigrants from countries all over the world who bring with them their customs and traditions,” said Caballero.

Peshawaria, as a legal adviser has studied, talked to and represented women from India who have immigrated to the United States with their husbands, Caballero said.

“Through her work she has documented their isolation, dependence and mental and physical abuse so far from home, family and support systems,” the California Secretary of State said, referring to the book authored by Peshawaria ‘Lives on the Brink: Bridging the Chasm between two great nations, India and United States’.

The book, she said, is a revelation and a call to action. “One we must heed if we truly want to be the land of equal opportunity for all,” Caballero said.

“She (Peshawaria) is a legal expert in Immigration and Women’s issues and after seeing the plight of those affected by physical and emotional abuse decided to stay back in United States to dedicate her life to their service,” the Consul General said.

In her remarks, Peshawaria, Attorney at law in California, said that domestic violence in South Asian community is seriously under reported.

“We Indian women are inculcated to keep such matters to ourselves. It is extremely difficult to overcome this tendency, especially when you find yourself in a strange land with unfamiliar people. It is extremely crucial for both India and US to look into ‘International Laws’ on this subject and wake up to this call before it’s too late,” Peshawaria said.

According to a recent survey in the Boston area, 40.8 per cent of South Asian women reported having been physically or sexually abused by a male partner in their lifetime.

A rate of over two out of five South Asian women report being victims of domestic violence, Peshawaria said.

The book offers preventative measures a bride-to-be should take and what immigrant women should expect when they come to the US.

“Difficulties encountered by immigrant women who marry US citizens — foreign or US born, without knowledge of their spouse’s criminal or fraudulent behaviour can be overwhelming,” she said.