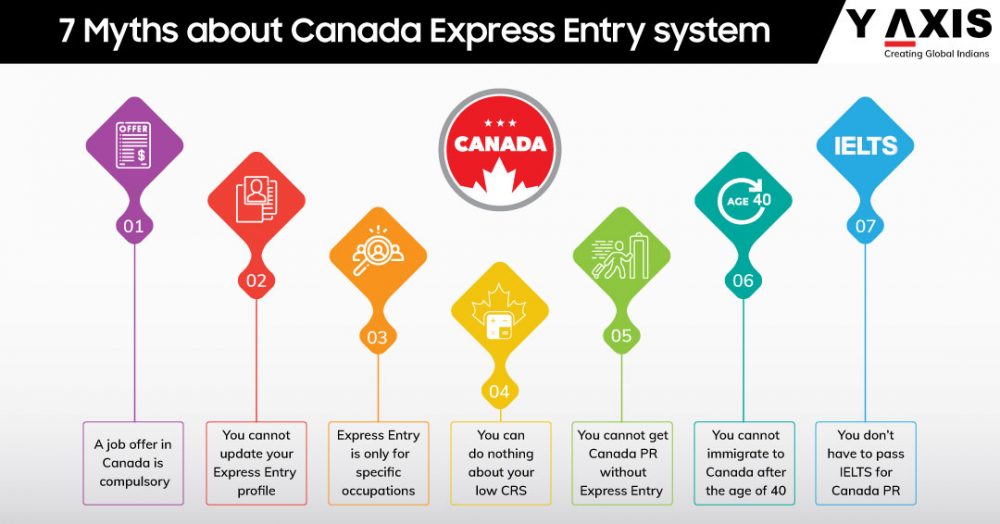 Canada is among the most sought-after destinations for migrating overseas among immigrants the world over. With a welcoming stance towards immigration and boasting a multi-cultural society made up of people from diverse backgrounds, Canada indeed has much to offer to anyone wishing to settle abroad with family.

Launched in 2015, the Express Entry was touted to be “Canada’s new active recruitment model”.

As an increasing number of people create their Express Entry profiles for acquiring Canada permanent residence, there are also many myths and misconceptions surrounding the Express Entry system of Canada.

MYTH 1: A job offer in Canada is compulsory.

Fact: Job offer in Canada is not mandatory for creating an Express Entry profile.

While a valid job offer from an employer in Canada can fetch you points – both at the time of eligibility assessment as well as for ranking your profile in the Express Entry pool later – a job offer is not compulsory.

Simply put, even though a job offer is not required, it can definitely improve your chances.

Do keep in mind that you cannot apply directly for Canada immigration. To be able to apply with Immigration, Refugees and Citizenship Canada [IRCC] for Canada PR, you must first have received an ITA for the same.

Fact: Once an Express Entry profile has been successfully created, the candidate can make changes any time.

Any subsequent changes in the human capital factors – such as, getting married, a better IELTS score – since the creation of the Express Entry profile can easily be updated.

MYTH 3: Express Entry is only for specific occupations.

Fact: Unlike certain other countries, Canada does not have any in-demand occupation list as such.

Canada’s National Occupational Classification [NOC] is a comprehensive listing comprising 10 broad occupational categories based on skill type. These are –

An idea of the comprehensiveness of the occupations covered by Canada’s NOC list can be got from the fact that there are 40 major groups, 140 minor groups and 500 unit groups. Each of the unit groups has a unique 4-digit code that corresponds to a specific occupation. For example, NOC 2264 is for the occupation of Construction Inspectors.

MYTH 4: You can do nothing about your low CRS.

Fact: There are many ways of improving your CRS scores.

Profiles that are in the Express Entry pool are ranked against each other based on a score. Known as the Comprehensive Ranking System [CRS] score, this is allotted out of a total of 1,200 points. While 600 points are allotted on human capital factors – referred to as the ‘Core’ points – another 600 are set aside as additional points.

While arranged employment can get you 200 CRS points, a provincial nomination through any of the provinces or territories that are a part of Canada’s Provincial Nominee Program [PNP] can fetch you 600 additional points.

A provincial nomination can, therefore, guarantee that an ITA will be issued in the subsequent federal Express Entry draw to be held.

MYTH 5: You cannot get Canada PR without Express Entry

10 provinces and 1 territory that are a part of Canada’s Provincial Nominee Program [PNP] have their own programs, many of which don’t require a candidate to create an Express Entry profile.

Similarly, the province of Quebec has its own immigration program that is not connected with the federal Express Entry system or the PNP.

However, do keep in mind that you must have the clear intention of settling down in the province that will be nominating you through the PNP.

MYTH 6: You cannot immigrate to Canada after the age of 40.

Fact: Canada immigration is for those that are 18 years and above. As such, there is no upper age limit specified by IRCC.

Age is a factor that will be considered, both at the time of eligibility calculation as well as when calculating the CRS score.

For Canada immigration eligibility calculation, your age will get you points as per –

While being between the ages of 18 and 35 can get you a maximum of 12 points for the age criterion, no points can be claimed for the age factor after crossing 46.

Do keep in mind that points are allotted on your age as on the day that IRCC gets your application.

Age also matters at the time of CRS calculation, getting you –

Note. – If a candidate’s spouse/partner is not coming along with them to Canada, or they are a Canadian PR/citizen, the candidate will get points for without spouse/partner.

MYTH 7: You don’t have to pass IELTS for Canada PR.

Fact: You cannot avoid a language test if you wish to migrate overseas to Canada.

IRCC categorically states, “You must prove your language skills by taking an approved language test.”

Canada has both English as well as French as the 2 official languages of the country.

Language tests for Canada immigration are –

Based on the test results, your language level will be ascertained as per the Canadian Language Benchmarks or CLB [for English] and the Niveaux de compétence linguistique canadiens or NCLC [for French].

While there is no way around giving the IELTS or other language tests, the minimum required varies from program to program.

Do keep in mind that your language test results must not be more than 2 years old, both at the time of completing your Express Entry profile as well as when applying for Canada PR later.

If your standardized language test results are due to expire in the near future, it is advisable to re-take the language test. Remember to update your Express Entry profile accordingly by entering the latest test results.

← Tips for a higher score in the quant section of GRE Did You Know? Interesting facts about Norway →