Which province in Canada has more job opportunities in 2020? 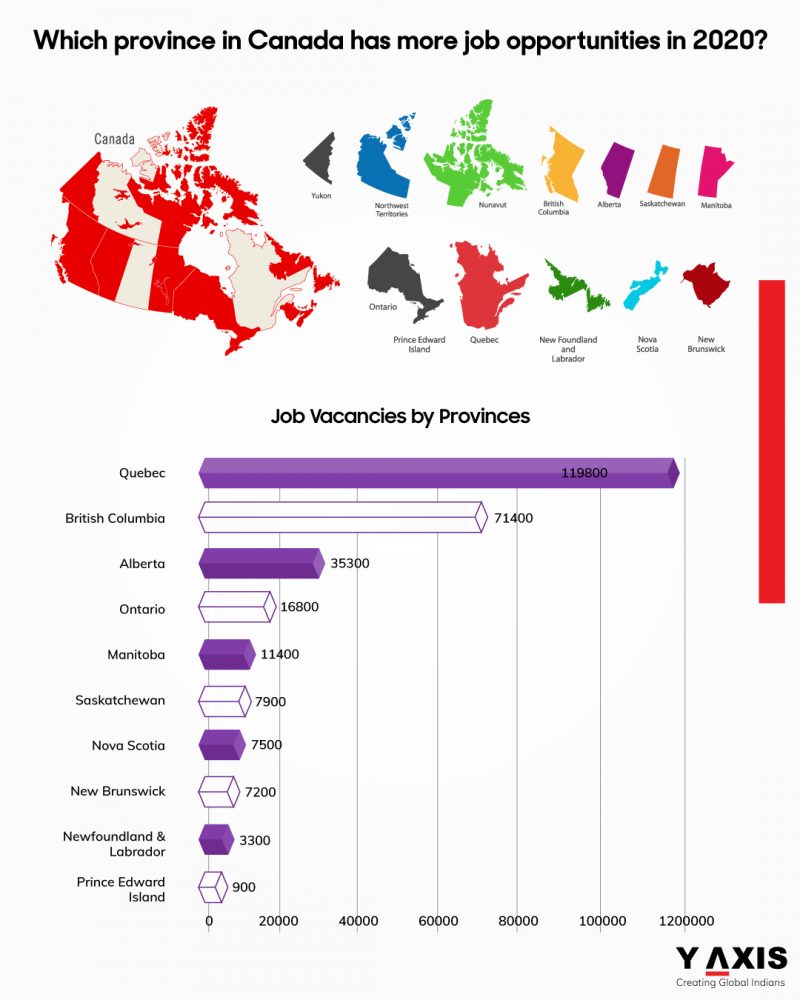 If you want to move to Canada on work, you will need to first get a job and then apply for a Canadaian work visa to move to the country. Since Canada is a large country, you will need to know where the job opportunities are for a successful outcome. This is provided you have zeroed in on the industry and the companies you are targeting. Knowledge of the provinces with the greatest number of job opportunities will help you know where to focus your job search.

According to a report by the Canadian Federation of Independent Business, around 430,000 private-sector jobs were available in Canada in the third quarter of 2019. This was the fifth consecutive quarter with a high vacancy rate. This could be an indication of the provinces with the highest job opportunities in 2020.

Where do overseas workers prefer to work in Canada?

Migrants intuitively prefer to look for jobs in the big cities of Canada like Toronto, Montreal and Vancouver. However, your success in finding a job in these places depends on your occupation. The top locations for migrants to look for jobs is the Western part of the country according to Statistics Canada. It says migrants have a higher rate of finding employment in the provinces of Manitoba, Saskatchewan and Alberta than other provinces because there is more demand for highly skilled foreign workers in these provinces. In fact, immigrants who live here have a higher employment success rate than those living in Montreal, Toronto or Vancouver.

How do job vacancies in provinces influence your job search?

Like we said earlier, if you want to succeed in your job search in Canada, you must first know where the jobs are. So, knowledge about the job vacancies in various provinces is crucial. The provinces have varied rates of unemployment which will impact your job search. For example, the provinces of Quebec, British Columbia, Ontario and Brunswick have some of the highest vacancy rates of any province or territory in Canada. As of November 2019, the vacancy rate in Quebec was the highest at 4 per cent.

In other cases, certain cities in Canada may have more job opportunities while the provinces they are situated in may have low vacancy rates.

You must consider these factors when using the job vacancy rates in the provinces as a benchmark to find work in Canada.

How is the demand for your occupation?

Your success in finding a job also depends on how much demand there is for your occupation. An occupation may be in demand in certain cities or provinces but may not be in other locations. Some occupations tend to be centered in certain places, for instance, tech companies concentrated in Toronto, Vancouver, Montreal will have more openings for tech workers. However, jobs in the healthcare sector are open across Canada. In fact, the top jobs in Canada will be in the engineering, mining, construction and the healthcare sectors.

To succeed in your job search in Canada, you must know about the provinces and territories that have the highest number of job vacancies, know where the jobs are being created and where your skills will be in high demand. This information will help you tailor your job search strategy for a successful outcome.

If you are looking to Study in Canada, Work in Canada, Visit Canada or Migrate to Canada, talk to Y-Axis, the World’s No.1 Immigration & Visa Company.

How to find a job in Canada